From conception to production… Working closely with Creative Director, Philip Khosid, I produced the artwork and packaging for renowned tribal jazz musician, Francisco Mora Catlett. What started out as a few sketches for an album concept that captured the tribal essence of fire, came together as an idea to capture photographs of flames in their true form. We didn’t want to capture the photos from a side profile. Instead, we decided to build a large frame platform that faced the SLR camera down directly toward the ground — bird’s eye angle — so that we were able to capture the ignition of a match head, and the progress of the flame as it grew toward the camera lens.

Over 500-high contrast photographs of flames were captured, and then sorted for clarity and uniqueness. With the selected photos, I started the post-production work. A circular flame pattern spirals around a photograph of a tribal member — taken in Africa and provided by Francisco himself. This imagery decorates the inner vinyl label, the cover art, and promotional materials. 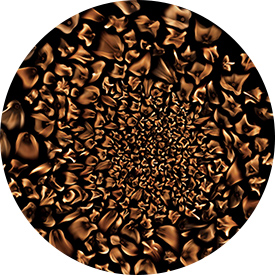 Like music, the art challenges a person to reach beyond what they already think they know and to experience different perspectives.

Each individual shot put together into the montage led to a successful execution, one that is much more visually captivating than one that would have been created with digital imagery.